If you need a splashy dessert for New Year’s weekend, try this easy recipe for mini cheesecakes. My three taste testers loved the recipe, and couldn’t tell the cheesecake was lower calorie/fat/carb.

One tester was my adult son, who came for a visit last week. He plans to bake the cheesecakes for a party back in Chicago.

These mini cheesecakes have the same flavor of regular, full fat cheesecake. The difference is in the texture, which  is extra light and more creamy. That’s the result of subbing reduced fat cream cheese for regular and 2% Greek yogurt for sour cream.

I adapted the recipe from the food blog Gimme Some Oven, making several changes. The original recipe called for a seven-inch spring form pan, a homemade crust and extended cooling period. 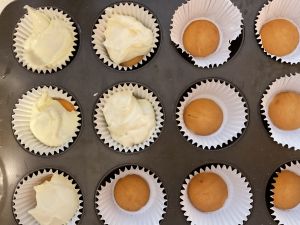 I made that recipe several times, then simplified it. I substituted a muffin tin for a springform pan and put a single vanilla wafer in each cup rather than fuss with a crust. These changes made the recipe much quicker to prepare and eliminated the need for extended cooling. The finished result? Almost identical.

Decorate! These mini cheesecakes are adorable fancied up for an event. I used gold sparkles and candied pecans for a New Year’s theme; other fine toppings are fresh berries or a scattering of mini chocolate chips.  The toppings will add a few calories and carbs, but nothing major.

The mini cheesecakes are best when made the same day they are served, but they can be made a day ahead and refrigerated. For longer periods, freeze the mini cheesecakes and thaw for two hours in the fridge. Since the cheesecakes are softer than the regular version, to retain best texture, try to avoid placing them at room temperature for more than 30 minutes.

Although the recipe serves 10, people may want seconds. If this is the only dessert you are serving, plan accordingly and make additional batches. Each batch takes about 20 minutes to make. I have not tried doubling the recipe, but it should be OK to do so.

Strongly consider using an instant read or quick-read food thermometer to make this recipe, as it can be tricky to figure out when cheesecake is done. The thermometers can be found everywhere these days – grocery stores, Target, Wal Mart, etc. – and cost under $15.

2 thoughts on “Cheesecake to Ring in the New Year”