Macaroni and cheese is one of my favorite foods – and now I can put it back on my plate without guilt. I tried Banza Mac and Cheese Deluxe, made with chickpeas, and it was good enough that I will buy a box again.
Traditional macaroni and cheese is made luscious with refined white flour, cheese and butter. Banza Mac and Cheese is made out of chickpea flour, which contains more fiber and protein than regular pasta and fewer carbs. It’s also gluten free. 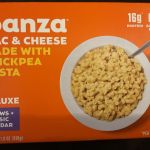 As a rule, I don’t particularly like faux versions of traditional favorites, and I have shied away from alternative pastas. However, after reading many favorable reviews, I decided to  try the Banza mac and cheese.

I’m glad I did: While it’s not the mac and cheese of my dreams, it is tasty. My husband, who is not an adventurous eater, had no problem adjusting to the dense texture of the chickpea pasta. He polished off a large serving with no complaint.

While some describe chickpea pasta as having a “nutty” flavor, neither my husband nor I noticed much difference between Banza Mac and Cheese and the regular version,  perhaps because of the strongly flavored cheese sauce.

The suggested serving size is one cup, which contains 285 calories, 16 grams of protein, 35 grams of carbohydrate, five grams of fiber and 3.5 grams of saturated fat. Overall, that’s a big nutritional improvement on traditional mac and cheese. Since the chickpea pasta is dense, that one cup serving is very filling. A smaller serving would be a good side to grilled chicken or fish.  The mac and cheese also could be jazzed up with a spoonful of chunky salsa or some crumbled turkey bacon bits.
Would I serve Banza mac and cheese to company? Perhaps not.  Would I dig into this hearty comfort food on a cool fall evening?
You bet.

I ordered Banza Mac  and Cheese Deluxe from the Walmart website; the price of $3.99 appears to be the lowest available in the area. The box is 11 ounces and easily feeds three people.